After carbon fibers have been manufactured and sized, they are often woven into fabrics. To begin creating fabrics, manufacturers create bundles of carbon fibers called tows. Tows are rated according to their fiber, or filament, content, commonly referenced as 3k, 6k, 12k, and 15k. The k stands for “thousand,” meaning a 3k tow is composed of 3,000 carbon filaments. Since a single strand of carbon fiber is only about 5-10 microns thick, a 3k tow comes in at only around .125” thick. A 6k tow would then be about twice as thick as a 3k tow, 12k four times as thick, and so on. The high number of strong carbon fibers in such a compact space is what gives carbon fiber materials their incredible strength.

Carbon fiber spools are woven into fabrics on a weaving loom. The most common weaves are plain weave, twill, and harness satin. Plain weave, or 1x1 weave, carbon fiber fabric is symmetrical and resembles a checkerboard. The tows are woven in an over/under pattern, offering tightly interlaced fibers which are highly stable. Fabric stability refers to a material’s ability to maintain its fiber orientation and weave angle. Because of its high fabric stability, plain weave carbon fiber fabric doesn’t work well for complex contours because it is not particularly flexible. However, it is easier to handle without creating distortions in the fabric. Therefore, it works well for flat sheets, tubes, and two-dimensional curves.

Crimp is the curvature of a single fiber in a weave, and plain weave carbon fiber fabric has a harsh crimp due to the tight interlaces in the tows. This harsh crimp can create stress points that cause areas of weakness over time. Twill weave consists of a 2x2 or 4x4 pattern and is the most commonly recognized type of carbon fiber fabric. In a 2x2 weave, each tow passes over two tows and then under two tows. It stands to reason, then, that a 4x4 weave consists of each tow passing over four tows and then under four tows. This over/under weaving creates a distinct diagonal pattern The distance between the tow interlaces in a twill weave is longer than with a plain weave. Therefore, fewer crimps occur, allowing less opportunity for stress points to be created.

Twill weave is pliable and can form to complex contours while still maintaining good stability. It must be handled more carefully than a plain weave fabric to avoid adding distortions to the weave. A 4x4 weave is easier to form than a 2x2 weave, but it also has less fabric stability. Satin weaves have been used for thousands of years to give silk fabric its beautiful draping quality while leaving the fabric smooth and seamless. When used for carbon fiber composites, satin weaves translate to an ability to easily form around complex contours. Obviously, this means satin weaves also offer less stability than other weaves. 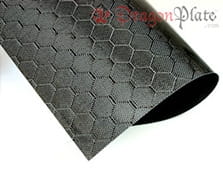 There are a number of other weaves that can be used to create carbon fiber fabrics. These include fish weave, spread tow, braids, unidirectional weave and custom weaves. Each weave contains unique properties that make it great for use in some designs and not a good choice for others. Many factors must be considered when determining which carbon fiber weave should be used for a particular function. These factors include strength, formability, stability, and crimp. Carbon fiber fabricators are experts in knowing which fabric to use for which design.